Making the Transition from Indoor Volleyball to Beach Volleyball

Professional beach volleyball players make the sport look so fun and easy, diving in the sand under the sun, getting a fantastic workout and a tan at the same time. In reality, running and jumping in the deep, hot sand is not as easy as it looks. The game of beach volleyball presents lots of new challenges to people who have only played indoor volleyball. Although many of the same skills are required for both games, there are definitely elements of the beach game that are completely foreign to the best indoor players. Three factors of the beach game that present significant challenges to new players are: the outdoor conditions, the differences in the rules, and the fewer number of players on the court. 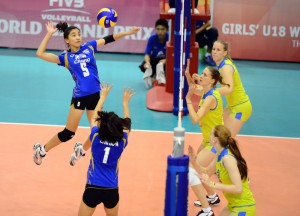 The most obvious difference between the beach game and the indoor game is the playing surface. The sand is more difficult to run and jump on because it is an uneven surface, and sometimes it is very deep. New players on the beach have to develop what are called “sand legs”, and this is done by practicing in the sand and training specific leg muscles to stabilize on the uneven surface. The shallower, hard packed sand is more similar to playing on a hard court. Players also have to adjust to the temperature of the sand. In the winter, the sand can be wet and cold. In the summer, the sand can be hot enough to create blisters. In these extreme conditions, sand socks are used. Other outdoor elements that pose a challenge for new players are wind, rain, and sun.

There are several differences between beach volleyball rules and indoor volleyball rules. On the beach, players are not allowed to set a serve. They have to receive the serve with a bump pass or an overhand pass with their hands together. On the beach, players cannot tip the ball over the net with an open hand. They must contact the ball with their entire hand, and not just their fingertips. The only time anyone can double hit a ball is when it is hard driven. Unlike indoor, the block counts as a hit on the beach. There are no rotation rules on the beach. Players on the beach can go under the net on the opponent’s side of the court as long as they don’t interfere with play. All of these rules take a while for indoor players to get used to. 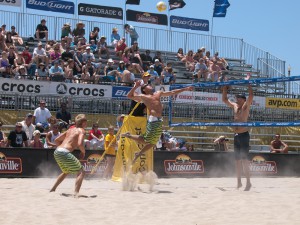 Beach volleyball is played with fewer players on the court. In doubles volleyball, two players are required to cover large areas of the court. This is a significant challenge for players that are used to covering one sixth of a court. It’s not only physically challenging, but mentally challenging as well. Physically, both players must be prepared to contact the ball on every serve. Mentally, the players need to be good communicators. The best beach volleyball teams are not always the most athletic ones, but the ones that have the most chemistry. This means that they cover the court effectively, communicate well and make consistent plays.