Volleyball is a game played by two teams on a rectangular court divided by a net. The object of the game is to send the ball over the net and ground it within the boundary lines on the opponent’s side of the court. The first team to reach a certain number of points wins the game. The following overview will cover general rules that are applied in most volleyball settings.

The Serve: The first serve of the game is determined by a coin toss. The server must serve from behind the end line. The ball may be served underhand or overhand. The ball must be clearly visible to opponents before the serve. The ball is allowed to graze the top of the net and drop to the other side for a point.

Scoring: In rally point scoring, points can be scored by either team after every play of the ball. Points are awarded after every fault to the team that didn’t commit the fault. Games are played to 21 or 25 points. A volleyball match consists of 3 games or 5 games. The first team to win 2 out of 3 games or 3 out of 5 games is the match winner. Tiebreakers are played to 15. A team must win by 2 points.

Rotation: A team will rotate each time they win the serve. Players will rotate in a clockwise manner. There will be two to six players on each side of the court. 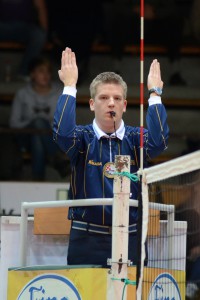 Ball Out of Bounds

Playing the Ball: Each team is allowed to hit the ball a maximum of three times before they have to send it over the net. Most of the time, the three contacts are a pass, set, and a hit, but any combination of legal contacts is allowed. A legal contact is any contact with the ball above the waist in which the ball does not come to a rest. A player is not allowed to hit the ball twice in a row. The ball can be played off the net on the serve or during a rally. A ball is considered inbound if it hits the boundary line on the court.

Violations: A fault is called when a player steps on or over the line on a serve. Also, a service fault occurs when the ball touches a member of the serving team, lands out of bounds on the opponent’s side of the net, or fails to go over the net. It is a violation to hit the ball illegally (carrying, palming, or throwing). Players are not allowed to touch the net at anytime. Teams must serve in the correct order.