The sport of volleyball is more than one hundred years old. It was invented in the United States by a man named William Morgan of Holyoke, Massachusetts. The history of volleyball began in 1895, when Williams was serving as the director of physical education at a local YMCA (Young Men’s Christian Association). He noticed the growing popularity of a game called basketball that had been invented in 1891 by his colleague James Naismith. Williams recognized that many young men enjoyed the game of basketball because it was fast paced and it involved full physical contact. However, he felt the need to create a game that could be enjoyed by men of all ages, especially middle-aged men. 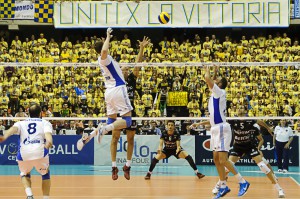 Williams decided to combine the elements of badminton, basketball, baseball, tennis, and handball to create the new game of volleyball, originally called mintonette. The game of mintonette was played on a court divided by a tennis net that was raised 6 feet 6 inches off the floor. Players used a rubber bladder from inside a basketball, and they hit the ball back and forth over the net until one of the teams was unable to return it. The name of the game was eventually changed to volleyball because of the constant volleying of the ball over the net.

The first game of competitive volleyball was played in 1896 at Springfield College. In a few short years, rules were established and changes were made to make the game more structured and challenging. In the very beginning, a team was allowed to have as many players as they could fit on a 50’ x 25’ court, and the number of hits was unlimited. Eventually, the number of players allowed was set at nine per team, and then reduced to six. The number of contacts was later established at three hits per side. The original rules of volleyball required a team to reach 21 points to win a game. In 1917, the number changed from 21 to 15. 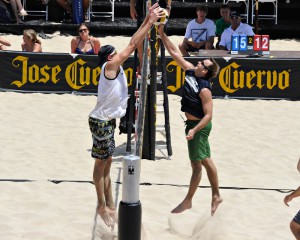 The equipment also changed over the years. The first volleyball nets were just higher than the average man’s height. The height of the net was raised approximately 18 inches to make the game more challenging. In 1900, a special ball was designed by Spalding specifically for the game of volleyball. The standard shape and weight of the ball were very similar to the balls we use today.

The first games of volleyball began in a gymnasium in the United States, and they were played by middle aged men. Over the years, the game has spread throughout the world, and it is enjoyed by men and women of all ages. Men from the YMCA in Holyoke took the game to missionary schools in Asia. Other countries that quickly picked up the sport were Russia and the Philippines. In 1928, the United States Volleyball Association was established, and in 1947, the Federation of International Volleyball was founded. A year later, the game was taken outside of the gymnasium onto the beaches of Southern California. Volleyball is now played in a variety of arenas and the appeal of the sport is evident across the globe.